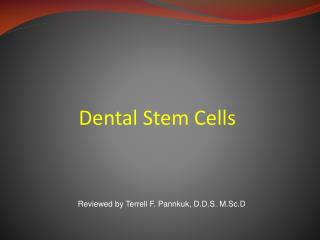 Dental Stem Cells. Reviewed by Terrell F. Pannkuk, D.D.S. M.Sc.D. Mesenchymal Stem Cells Derived from Dental Tissues vs. Those from Other Sources: Their Biology and Role in Regenerative Medicine. This presentation is an outline derived from the following article:. Antibiotics in Endodontics - . killing the bugs without the drugs. bacteria surround us:. for billions of years, bacteria