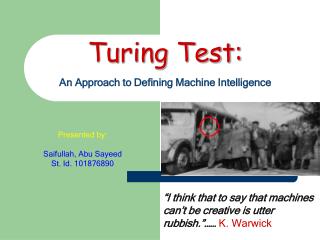 Turing Machines - . motivation. our main goal in this course is to analyze problems and categorize them according to

Turing Machines (13.5) Longin Jan Latecki Temple University - . based on slides by costas busch from the course

Clothing I Test Review - . state skills test. 1. what do the feed dogs do when sewing?. control the position of the

A CASE FOR EMOTIONAL INTELLIGENCE IN WORKPLACE WELLNESS - . annette prins . introduction. the changing world of work

Intelligence Testing - . a brief history of intelligence. the concept of 'intelligence' is relatively new, unknown a

Emotional Intelligence - . zafar a reshi department of botany university of kashmir srinagar. structure of the lecture is

Lifespan Development Chapter 20: Death and Grieving - Brain death occurs when all electrical activity in the brain

A Soda Machine Controller - . or, a pop machine controller, depending on where you grew up…. problem statement. design