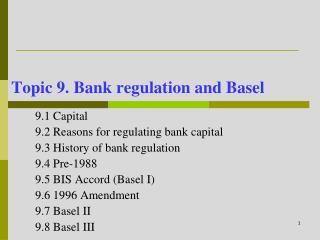 Nur 4206 Management of patients with renal/urinary disorders - . by linda self. functions of the kidney. regulation of

A Critique of Revised Basel II - . 1. conclusions. 2. xyz theory of regulatory capital. randomness in the economy

Banking Services - . life transitions. why should we pay attention?. opportunity cost errors make the most of our money