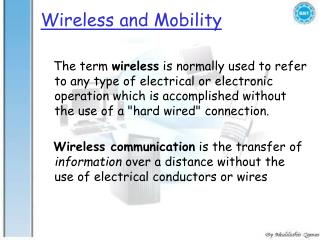 Wireless and Mobility. The term wireless is normally used to refer to any type of electrical or electronic operation which is accomplished without the use of a "hard wired" connection. Wireless and Mobility - . mobility for formal and informal, physical and virtual learning, social, and work environments

Wireless Mobility System - . what is it?. a solution that provides continuous broadband connectivity to a moving vehicle.

Mobility and Wireless Solutions for Schools - . where learning and technology become one rob martin – bell wireless