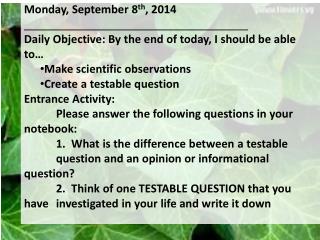 Monday, September 8 th , 2014 Daily Objective: By the end of today, I should be able to… Make scientific observations Create a testable question Entrance Activity: Please answer the following questions in your notebook: Daily Oral Language &amp; Grammar - Please come in, sit in your assigned seat, and open your binder to your

Weekly Homework - . homework is due on the day it appears. for example if notes for pg.210-215 are due monday, then

Today Is Sunday - . by dr jean. today is sunday. sunday – chicken all you lucky children, well that’s ok!. today is

Listen to Reading - . daily five consists of five components that students (ideally) practice daily:. what is the daily