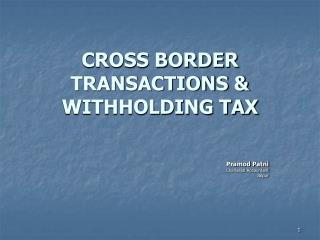 CROSS BORDER TRANSACTIONS & WITHHOLDING TAX. Pramod Patni Chartered Accountant Jaipur. SCOPE OF DISCUSSION. Section 195 of ITA , 1961 Obligatory upon the Payer to a Non Resident to deduct tax at source from any credit / payment to the account of NR

The Role of the Board in Related Party Transactions - Jospeh a. mccahery university of amsterdam 2006 oecd policy

Lesson 4: Reconciling Transactions - . training objectives. at the conclusion of this lesson, pcms lapc’s and apc’s