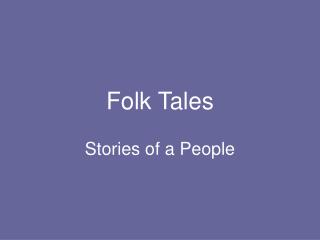 Folk Tales. Stories of a People. Folk tales are stories that teach a lesson and are passed down orally to each generation. There are several types of folk tales:. Literary Terms. Motif —an element of a story that is used in many stories from many cultures

Folk Tales - . what is a folktale?. folktales were passed down from generation to generation by word of mouth, which is

Elements of Folk Tales - . characteristics of the genre. folk tales are…. a collection of literature that grew out of

African-American Folk Tales - . african-american folk tales originated with peoples who were brought from africa against

Myths, Folk Tales, Fables, and Fairy Tales - . how are they similar and different? adapted from: kim denney by stephanie

Myths, Folk Tales, Fables, and Fairy Tales - . what is a myth? a myth is a story that usually explains something about

Tolstoy, Folk Tales, and Theme - . “what men live by”. folk tales. folklore can be divided into four areas of study:

Fables &amp; Folk Tales Review - The tiger who would be king by james thurber the ant and the dove by leo tolstoy the

Fables &amp; Folk Tales Review - The tiger who would be king by james thurber the ant and the dove by leo tolstoy