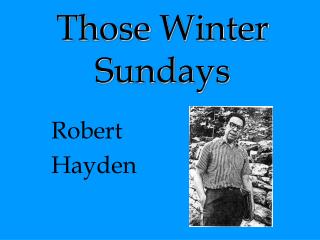 Those Winter Sundays. Robert Hayden. Robert Hayden (1913-1980). Born August 4 th , 1913 as Asa Bundy Sheffey in Detroit, Michigan and was taken into a foster family Was raised in a slum called Paradise Valley (Detroit’s ghetto) Known for his poems that express African-American experience

“Those Winter Sundays” by Robert Hayden - . erin frith. “those winter sundays”. sundays too my father got up

Appreciation Sundays - . your ministry is not in vain. appreciation

Appreciation Sundays - . your ministry is not in vain. appreciation sunday. the ministry of brett &amp; katie sears

The Four Sundays of “Advent.” - . “advent” means “coming&quot; - referring to the coming of jesus the

Sundays of the Great Lent - . 2 nd week : temptations. we are walking on the road to the heavens , satan tries to

Those Romantics - . it’s not all hearts and flowers…. poets used to be the rock stars of their generation: shocking,

THOSE MOTHERFRACKERS! - Is an ebook which describes how the organization of petroleum exporting countries, (opec), tried

Those Outside - . what should be our conduct and concern toward those who are not disciples of jesus?. where are they