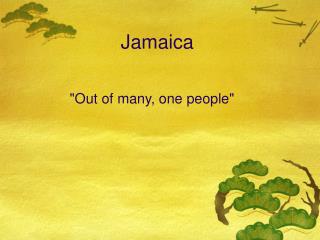 Jamaica. "Out of many, one people". Flag. The flag of Jamaica was officially adopted on August 6, 1962. JAMAICA - . jamaican location. jamaica is south of cuba, west of hispaniola, and east of the cayman islands. jamaica

Jamaica - . by shayla. jamaica is located in central america and the caribbean. where is jamaica located?. jamaica’s

Jamaica - . what kind of place is jamaica? why are we talking about jamaica? do we have anything in common?. our

Jamaica - . jamaica is located south of cuba in the caribbean sea. in the western part of jamaica there are mountains.

Jamaica - . by alex and hannah . flags and other symbols . this is the jamaican bird-swallow-tail hummingbird this is the

Jamaica - . kingston. keely lisco. data files. what inference can you make about your country based on the data files?.

Jamaica - . by isabel watts. where is

Jamaica - . food. the jamaican food is usually very spicy . a typical lunch or dinner are plenty of food and last for

JAMAICA - . geography. the island of jamaica is mainly composed of mountainous terrain surrounded by a small strip of