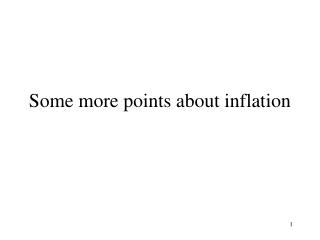 Some more points about inflation. Comparing dollars at different points in time. Did you ever have an old timer say to you, “well, when I was a kid bread was a nickel and I had to walk up hill to school in the snow and then uphill to get home.” The nickel part is what we want here. Some More About TED…

some points About Group Discussion - Preparing for the group discussions? we are the best place to look for the latest

some points About IAS Exam - Halfmantr is the fastest growing online community about ias exam. relevant and much needed

Some new points about civil services examination - Civil services is an umbrella term for the group of services.the top

Read some points about college online payment - Web hosts provide the tools you need to easily build your own web site,

Some thoughts about critical and triple points - . edward shuryak department of physics and astronomy state university of

Some Basics Points to Learn About Bitcoin - If you have been hearing the bitcoin buzz, we have come up with a few basics

Know Some More Details about Bobbleheads - Many people are not aware of the bobbleheads. these are fundamentally dolls

Some Important Points!!! - . “attitude, not aptitude will take you to the altitude.” attendance policy. class

Some Design Points - . stéphane ducasse --- 2005. the design in question. the basic idea behind frameworks

Some Discussion Points - . what metrics should be used for comparing observations? what distributional metrics could

Some More - . figures of speech. rhetorical question. hyperbole. understatement. pun. i like the latest horror movie so

Some points about best website for civil services - Halfmantr provides best of the study material about ias. the mentor

some more details about niet online payment - Typically, therefore, there is no real cost to the publisher from these