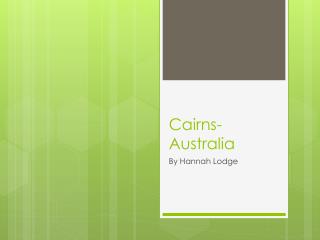 Cairns- Australia. By Hannah Lodge. Over view of Cairns. Cairns is a bustling tourist center with countless excursions to the Great Barrier Reef, one of the world's most popular diving sites, and Daintree Rainforest departing daily. While Interesting Facts About Cairns, Australia - Ease your trip with some of the biggest offers southwest airlines deals

Top Three Beautiful Destinations in Cairns, Australia - Ease your trip with some of the biggest offers, cut down your

Surveyor Cairns - Offers a wide range of surveying services. we provide everything you are looking for u2013 high

Pest Control Cairns - Pest control in cairns is considered as one of the best place to control the pest. pest are the