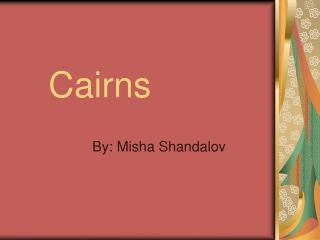 Cairns. By: Misha Shandalov. Climate. Tropical weather in North Queensland follows a fairly consistent pattern each year. April, May, June, July, August, September and October are the most popular times to visit with the school holiday times for Australia and New Zealand being peak times. Cairns- Australia - . by hannah lodge. over view of cairns. cairns is a bustling tourist center with countless excursions

Surveyor Cairns - Offers a wide range of surveying services. we provide everything you are looking for u2013 high

Pest Control Cairns - Pest control in cairns is considered as one of the best place to control the pest. pest are the

InterOil and Cairns - “opportunities in exploration and lng”. interoil and cairns. a developing vertically integrated

Diane Cairns Liverpool - ‘for many disorders with a genetic basis, phenotype variability is dependent upon which parent