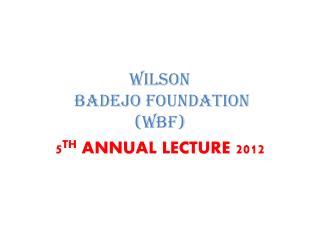 WBF Program in Bulgaria - . promotion of economy and employment program (wbf ) in bulgaria. sponsored by the german

WBF Overview and Future - Our

Women’s Business Forum - . new website how to: free members who have been receiving the wbf newsletter. go to our

Wilson Executive - Hotel is situated near st stand ( koli ali) mahabaleshwar. the hotel has a calm environment even