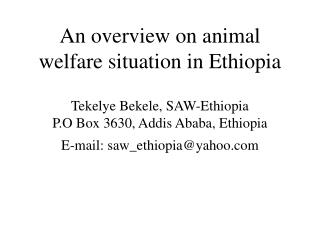 An overview on animal welfare situation in Ethiopia Tekelye Bekele, SAW-Ethiopia P.O Box 3630, Addis Ababa, Ethiopia E-mail: saw_ethiopia@yahoo.com Background information on animal welfare A. W. can be defined and assessed using any one of the following four concepts.

KM4Dev Addis / Ethiopia - . who are we? what do/did we do? how can we all make this more useful?. what is

RITD UNECA, ADDIS ABABA, ETHIOPIA May 31 2011 - Background. au creation of recs as pillars for integration and

Ethiopia - . by dale and c onnor. landscape. ethiopia has got crops and fields full. afracai has many types of

Ethiopia - . development plans for internet cafes. geography of ethiopia. ethiopia is the oldest independent country in