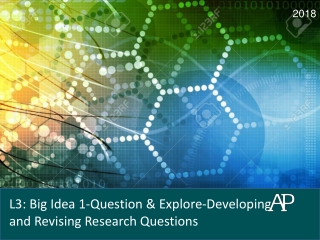 L3: Big Idea 1-Question & Explore-Developing and Revising Research Questions. Must choose a topic you love. If you don’t love it, you won’t want to work on it for a year. So, what are you passionate about or interested in? “I just love Disney. I want my topic of research to be about Disney”.