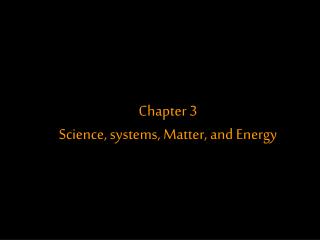 Chapter 3 Science, systems, Matter, and Energy. Easter Island What Happened?. What important lesson lesson can we learn? Does it apply to “our island”?. Scientific Method. “The whole of science is nothing more than a refinement of everyday thinking” Albert Einstein. Theory

Chapter 2 – Science, Matter, Energy and Systems - . endeavor to discover how nature works and to use that knowledge to

Science, Systems, Matter, and Energy - . overview questions. what is science, and what do scientists do? what are

Science, Matter, Energy, and Systems - . chapter 2. &lt;&lt;&lt;triple brackets are on

Chapter 3 Matter and Energy - . matter. matter is anything that occupies space and has mass. even though it appears to be

Chapter 3 Matter and Energy - . 3.1 in your room. everything you can see, touch, smell or taste in your room is made of