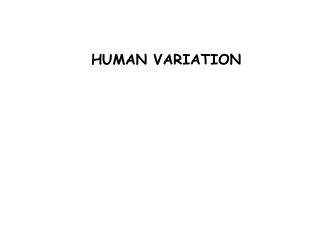 HUMAN VARIATION. How do we measure and classify human variation in order to study it?. TWO TYPES OF TRAITS. Discrete or discontinuous traits: traits occur in distinct Categories: Trait is there or it is not (examples: albinism,

Human Variation - . (chapter 7). human variation. genetics is the study of biological traits . these traits are coded for

Human Variation - . how and why are humans different?. natural selection. 1. variation (every species has a lot of

Understanding Human Biological Variation - . the myth of biological races. the context . “the problem of the 20 th

Motivations to study human genetic variation - . the evolution of our species and its history. understand the genetics of

Variation of the human face lab - . need to add dimples and freckles… need to adjust size so everything fits within