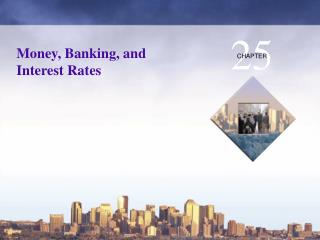 25. Money, Banking, and Interest Rates. CHAPTER. Objectives. After studying this chapter, you will able to Define money and describe its functions Describe the banking system and explain the economic functions of banks, the Bank of Canada, and the payments system

Learning Objectives - 9. learning objectives. it will be worth your time to increase your rate of interest in these

Ch. 14: Money, Interest Rates, and Exchange Rates - . the outline. we learned that exchange rates depend on interest

Banking - . systems. what is meant by the ‘fractional reserve’ system?. banking. analyze money creation in banking

Unit: Money, Banking and Monetary Policy - . topic: banking. learning targets. the student will understand how the