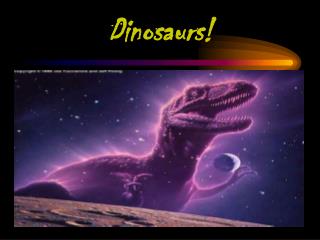 Dinosaurs! Terrible Lizard The word dinosaur means terrible lizard! BIG and small. Scientists believe that dinosaurs lived on earth over 215 million years ago! There were many different species of dinosaurs. Some were as small as chickens, some were taller than 3 story buildings!

A Better World is Possible-- Precautionary Action to Take Back America from the Dinosaurs - . yes, a better world really

Dinosaurs Travel - . a guide for families on the go. vocabulay for dinosaurs travel. about the book. story by laurie

GLY/MFC 137: The Dinosaurs - . scientific method. science is a way of understanding the physical universe. it is a set of

cloning - . jurassic park is a theme park which is populated with ________ dinosaurs. the popularity of this film proves

GEOL 240 The Dinosaurs: Dinosaur Explorers - . summary. dinosaur is a recent concept; difficult to explain the prevalence

GEOL 240 The Dinosaurs: Thyreophora - . what is a thyrephora. thyreophora. “shield bearer” armored dinosaurs

The Cenozoic Era - 65 ma to presentthe cenozoic spans only about 65 million years, from the end of the cretaceous and the