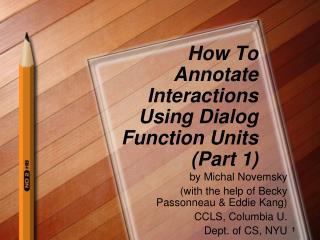 How To Annotate Interactions Using Dialog Function Units (Part 1) by Michal Novemsky (with the help of Becky Passonneau & Eddie Kang) CCLS, Columbia U. Dept. of CS, NYU The Loqui Corpus

How To Annotate Interactions Using Dialog Function Units (Part 1) - . by michal novemsky (with the help of becky

How to Annotate Text - . what is annotation? . annotation is the act of “talking” to the text as you read it. though

How to Annotate a Text - . plot events. at the top of the page briefly summarize any important plot events . every page

How to Annotate a Text - . good reading background. most reading is skimmed. when you need to learn, reading requires

How to annotate an article - . annotating . what is annotating?. annotating is pointing out the most important

How to Annotate during Powerpoint Presentations - . lynne mayo. step one. while giving a slide show presentation ,

How to annotate for an “A”! - . please take good notes!. ugh. i hate annotating. . • studies show that when we

Converting Units - . likely the most useful thing you will learn all year. lecture part a. ( just watch and think ) a

How and Why to Annotate a Book - . notes derived from article published by ap central and the college board. note-taking

Accommodation Services Units - . week (1) part one. welcome to the hospitality industry week (1). after reading and