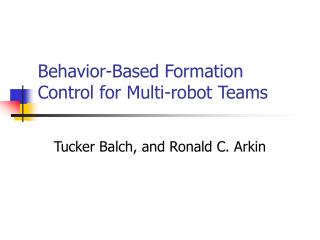 RFId-Based Exploration for Large Robot Teams - . v. a. ziparo, a. kleiner, and b. nebel dept. of computer science,

Vision-Based Robot Control - . bax smith term 8 electrical (cc). outline. how i came up with this project components of

An Overview of Robot Behavior Control - . with insight into ai-based and algorithm-based approaches. agenda. what is this