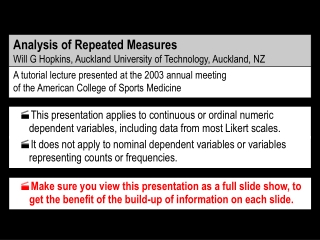 Analysis of Repeated Measures Will G Hopkins, Auckland University of Technology, Auckland, NZ. A tutorial lecture presented at the 2003 annual meeting of the American College of Sports Medicine.

The University of Auckland - Movies, maps and memories: extending our collections, refining our services prdla 2010 brian

The University of Auckland - . an introduction by ulrich speidel, department of computer science. quick facts about the

Cleaning Service in Auckland, NZ - We are the leading provider in the field of carpet cleaning service in auckland we

Analysis of Variance: repeated measures - . tests for comparing three or more groups or conditions: (a) nonparametric