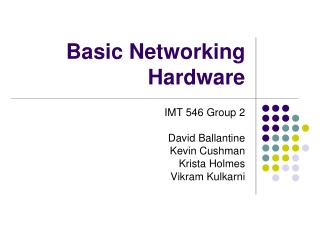 Networking Hardware - . hubs – how they work. hubs send data from one computer to all other computers on the network.

NETWORKING HARDWARE - . what is a network?. network : a group of two or more computer systems that are linked together

Basic Networking - . vermont department of libraries prepared by rob geiszler. some fundamental concepts. the network a

Hardware Networking Courses - One of the best hardware & networking institute in india, jetking, an iso 9001:2008

Basic Hardware Overview - . system case. the major hardware components of the computer, as opposed to the i/o devices

Basic Computer Hardware - . a computer is:. an electronic machine that can be programmed to accept data ( input ), and

What is Networking Hardware? - . networking hardware includes all computers, peripherals, interface cards and other