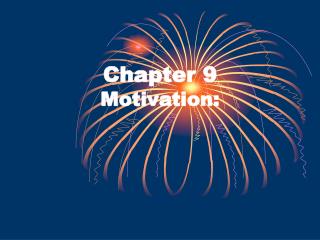 Chapter 9 Motivation:. Motivation Is a Dynamic Process. The study of motivation is essentially the study of what moves a person or animal to act in a particular way. Motivation: an inner state that energizes behavior toward the fulfillment of a goal . Theories of Motivation . Motivation and Emotion - . psychology 101 woodruff, spring ‘07. goal. motivation. what motivates you? where do you see

Motivation - . what is motivation? what do you think it means?. motivation. the forces that act on or within an organism

Motivation - . motivation basics. what is motivation? an internal state that arouses, directs, and maintains behavior.

THE SIX Cs OF MOTIVATION - . what are they and how do you use them in the classroom?. choice. definition