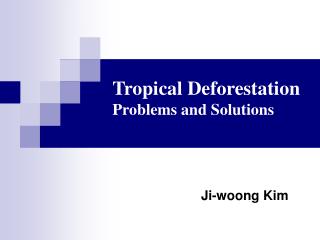 TROPICAL DEFORESTATION - . at least half of the world’s terrestrial plant and animal species live in tropical rain

Tropical Deforestation in India - . introduction -. deforestation actually means, cutting down of forests on a large

Problems and Solutions - . using the lake district sheet from last day summarise what you have learned onto a sheet of

2. Land-Use Change (primarily tropical deforestation) - How are we increasing the co 2 concentration?. 1. burning of

Global problems and solutions - . by sahaj s. and warren p. pollution . here are some ways people pollute every day that

MEDC’s: Problems And Solutions - . ib sl. stages in urbanisation. urbanisation is almost at an end in medc’s. the

Plumbing Problems And Solutions - If the venting is absent or inadequate, provide upgrade to surmount the problem. the