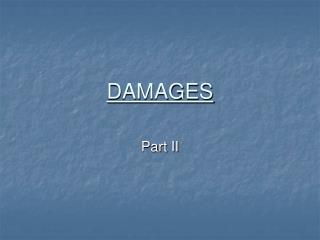 Consequential Damages A refresher on consequential damages - . t.bowen 7 december 2011. purpose. the purpose of this

Torts and Damages - . up to now, everything discussed has related to contract liabilities - voluntary assumptions of

Damages for Dignitary Torts - . what is a dignitary tort? torts that assault or impair our dignity but don ’ t