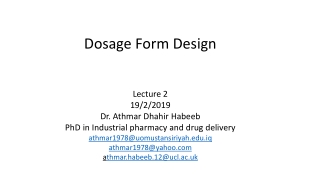 The Design of Dosage Form - . drugs are administered as a mixture of active ingredient &amp; excipients. excipients