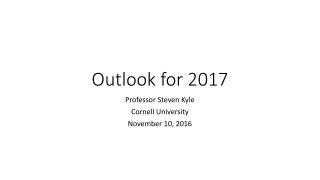 Outlook for 2017. Professor Steven Kyle Cornell University November 10, 2016. Grading My Predictions from Last Year. Most economists are taught to avoid naming both a number and a date I do it anyway every year and post the results on my website How did I do last time?.

ECG Equipment Market Outlook 2017-2024 - Ecg equipment market is projected grow at a cagr of 6.32% during the forecast