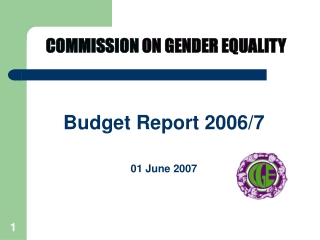 COMMISSION ON GENDER EQUALITY - . submission to the ad hoc committee on justice and constitutional development 9 june

THE COMMISSION FOR GENDER EQUALITY

THE COMMISSION FOR GENDER EQUALITY - . objectives. to establish working partnerships with the leaders share information

Gender Equality - . bell ringer in. hand in anything you might be missing into the hand-in bin bad-habits worksheet

Gender equality - . by: cass miller, sara schnuettgen, and macie sorensen!. definition!. it is a equal representation of

Gender Equality - . end all forms of discrimination against all women and girls everywhere indicator sex ratio at

GENDER EQUALITY - . what is gender equality?. (also known as gender egalitarianism or sexual equality) fairness of