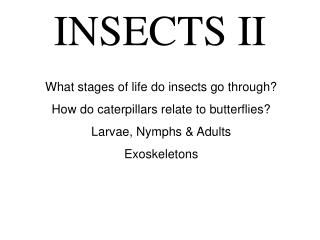 INSECTS II. What stages of life do insects go through? How do caterpillars relate to butterflies? Larvae, Nymphs & Adults Exoskeletons. Stages of Life. Incomplete metamorphosis : an egg becomes a nymph, which evolves gradually into an adult.

Insects - Insects insects have 6 legs. no- a spider is not an insect. it has eight legs. click on the spider to go back.

Insects - . victor b uccafuri. a phids. aphids are among the most destructive insect pests on cultivated plants in

Insects - . insects. insects have thrived for more than 300 million years (long before rise and fall of dinosaurs) very

INSECTS - . can you identify the insect? delete the words that don’t fit the picture. which insect is this?. ant bee

Insects - . class insecta. most numerous and diverse of all the groups of arthropods. (there are more species of insects

Insects - . what are insects?. october 30, 06. insects are the most diverse and numerous of the arthropods. 1.1 million

Insects - . insect bad guys!. you’ll never look at a bug the same. what is an insect?. 3 body parts. head. thorax.

Insects - . an insect has:. 6 legs 3 main body parts one or two pairs of wings 2 feelers (to feel things and find food)

Insects - . chapter 10 section 3. arthropods with three body sections, six legs, one pair of antennae, and usually one or