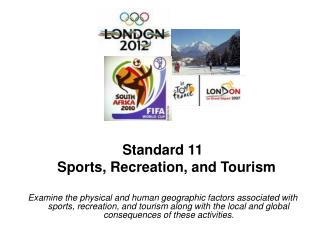 Standard 11 Sports, Recreation, and Tourism Examine the physical and human geographic factors associated with sports, recreation, and tourism along with the local and global consequences of these activities. 11.1 Geographic Distribution of Sports

Tourism and Recreation in BC - . history.   tourism started around the late 1800’s. people were amazed by the

2 Recreation, leisure and tourism organizations - . learning outcomes . by the end of this session students should be