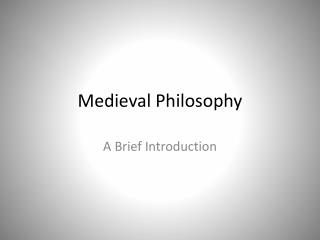 Medieval Philosophy. A Brief Introduction. Medieval philosophy is enjoying a sort of “renaissance.” Historians have challenged the entire notion of “the middle ages.” For philosophers, this is no longer a period of “book reports” Philosophy – Moral Philosophy - . ‘the master said, the man of wisdom is never in two minds; the man of benevolence

Philosophy - . a short introduction. what is philosophy?. philosophy is about: finding answers to serious questions about

PHILOSOPHY - History of. philosophy. aristotle said: “ all men by nature desire to know .” he further stated that

Philosophy - . a brief introduction. the beginnings of philosophy. the word philosophy literally means love of

Philosophy - . is the search for knowledge about the world. it studies the natural world, human behavior, and thought .