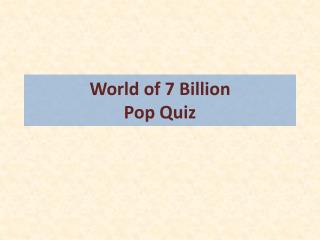 World of 7 Billion Pop Quiz. 1 . What is the world population in 2010?. c) 6.9 billion . Note that world population figures are the best estimates demographers can make, but are not precise counts. 2. When will the population reach 7 billion people?. a) Fall 2011. Pop Quiz - . international communication. quiz. in the us, the amish speak a dialect of aramaic dutch german 2. true or

Pop Quiz - . define validity translate and evaluate the truth/falsity of the following statements: if khalifa is neither

Pop Quiz - . 1)a change in a sequence of dna is called what? 2) darwin called the ability of an organism to survive and

Pop Quiz - . bittner argues there are 3 traits commonly associated with police work which affects how people view the

Pop Quiz! - . get paper and pencil ready. this will be handed in. but... it’s open note, you can talk to your

Pop Quiz - . what book in the old testament is more than any other by future prophets, including jesus christ?.

Pop Quiz - . define fan-in and fan-out does it matter if (what should be done about) code (which) has a high fan-in and a

Pop quiz! - . have your clickers ready… let’s hope this works! if you have registered your clicker number on moodle ,

POP QUIZ! - . lo: learn how to control a sprite to move using the x and y co-ordinates. learning objective. go to