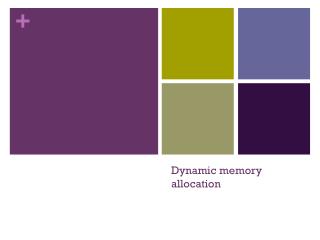 Dynamic memory allocation. Introduction. We often face situations in programming where the data is dynamics in nature. Consider a list of customers. When list grows we need to allocate more memory space to the list to accommodate additional data items. Dynamic Memory Allocation - . the memory usage for program data can increase or decrease as your program