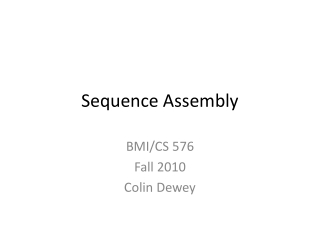 Sequence Assembly. BMI/CS 576 Fall 2010 Colin Dewey. The sequencing problem. We want to determine the identity of the base pairs that make up: A single large molecule of DNA The genome of a single cell/individual organism The genome of a species Genome Assembly - . charles yan 2008. fragment assembly. given a large number of fragments, such as acc ac at ac at

Sequencing and Assembly - . cont’d. steps to assemble a genome. some terminology read a 500-900 long word that comes

Multiple sequence alignment Why? - . it is the most important means to assess relatedness of a set of sequences gain

KS2 assembly - Use the sewa day assembly presenter’s guide pdf to help you personalise and deliver this assembly.