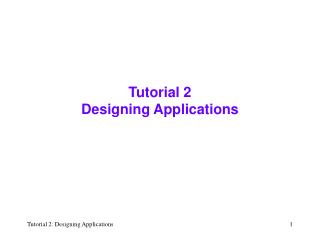 Tutorial 2 Designing Applications. Solving the Problem Using a Procedure-Oriented Approach. Emphasis of a program is on how to accomplish a task A flowchart uses standardized symbols to show the steps needed to solve a problem Pseudocode uses English phrases to describe the required steps Designing J2EE Applications - . objectives. after completing this lesson, you should be able to do the following:

Designing API-Enabled Applications - . colin bowern. atc313. apis are all the rage these days…. apis are everywhere

Tutorial #2 - . quiz next week. cover everything you’ve seen in the course so far combination of true/false,

Tutorial 2 - New perspectives on the internet, 8th edition. objectives. learn about email and how it workslearn about