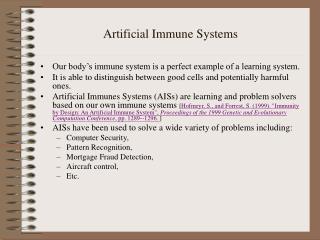 Artificial Immune Systems. Our body’s immune system is a perfect example of a learning system. It is able to distinguish between good cells and potentially harmful ones. Natural and “Artificial” Immune Systems - . this is lecture 19 of biologically inspired computing; about natural and

The Lymphatic and Immune Systems - . main structures of the lymphatic system lymphatic vessels main components of the