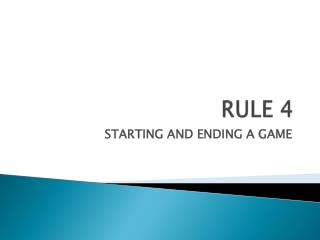 4-4 Multiplication Rule - . the basic multiplication rule is used for finding p ( a and b ), the probability that

Comma Rule #4 - . ms. frost. the rule. use a comma to set off nonessential (not important/not needed) clauses and

A Review of Chapter 4: The SFO Rule – Way of Life Rule 4-19 - Guidelines for initial formation in the secular

4-5 Writing a Function Rule - . objective: to write equations that represent functions. 4-5 writing a function rule. you

Classification of Fouls Rule 4-19 - . to present to the chapter the methods of properly administering: various

The 4-Minute Rule for Seo Packages - Google, proficiently straining individuals who are not fascinated and enabling you

Rule - . 50 percent of our net income should be spent on &quot; needs . &quot;. image retrieved from:

Sine Rule and Cosine Rule - . clicker practice. soh/cah/toa can only be used for right-angled triangles. the sine rule