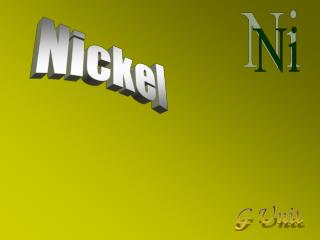 Nickel - . by: mikayla kwok february 5, 2013. introducing nickel. nickel's symbol is ni and it's atomic number is

Nickel Sulphate - (http://www.murarkachemicals.com/products?type=nickel-sulphate) is mildly toxic and carcinogenic. the

Nickel Hockey - . write 20 separate sentences using the following vocabulary terms. do not define the term in the

Nickel By : Grayson - . http://www.the-vug.com/vug/nickel02.jpg. what is nickel?. nickel is a metallic chemical element.

Nickel and Dimed - . on (not) getting by in america. about the author. barbara eherenrich originally from butte, mt, but