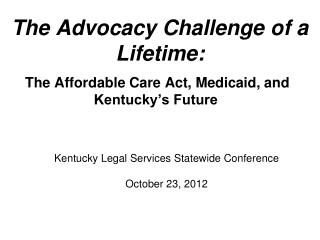 One Voice Central Texas Presentation to CAN Board - . august 10, 2018. our mission &amp; vision. we are a coalition

Education Policy Advocacy - . objectives: to learn why advocacy is one of the roles of csos. to learn the process for

4-1-1 on Library Advocacy - . what to do and where to start to get the word out about libraries. presented by carla land.

Federal and State Advocacy: How are They Different? What are the Big Issues?  - . cassie sauer, senior vp, advocacy and

Object Lifetime and Pointers - . various languages… . why do we care?. could affect performance could affect

Advocacy Training - . know your power national hispanic prayer breakfast june 18-20, 2013. what you need to know. what is

Advocacy 101 - . from the classroom to the legislature nceca telephone seminar diversity in leadership alliance october

Generations: The Challenge of a Lifetime for Your Nonprofit - . based on the widely acclaimed new book by peter c.

Exploration of options around standards and guidelines for mentoring and advocacy? - . michael marr advocacy and

Introduction to advocacy - . objectives. understand what is meant by the enabling environment understand the important

Wealth strategies with Roth IRA conversions - . we are living longer while “guaranteed” lifetime income sources, such

What is advocacy, who does it and what is its role? - . joan o’donnell the advocacy initiative

Advance Your Mission With Advocacy - . community pueblo october 20, 2011. when you think about it, all nonprofits are in