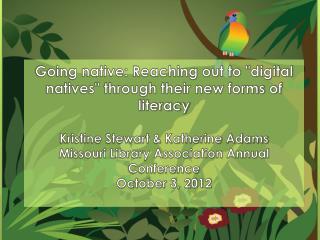 Going native: Reaching out to "digital natives" through their new forms of literacy Kristine Stewart & Katherine Adams Missouri Library Association Annual Conference October 3, 2012. Literacy. Literacy in a traditional sense , is the “ability to read and (sometimes) to write” Literacy - . using stasis theory as a basis for a chapter on literacy (designed for an undergraduate course in

Literacy - . © claire laurie 2004. identify the apostrophes and whether they are used for omission or possession (from

Literacy - . in our literacy lessons we have to become good detectives... we need to be able to use clues to help us

Literacy - Welcome back to school for the second half of the summer term. we have a new teacher in 10 called mrs

Literacy - . what is it?. first, let’s clear up some misconceptions …. “in years past, not everyone knew how to

Literacy - The doors of language learning. 1: listening2: speaking3: reading 4: writing. what is literacy?.

Literacy - . a global report. the state of education series. march 2013. summary. this presentation is divided into two

Literacy - . a prevention program. introduction. it is widely acknowledged that the success of a modern society is

Literacy - . the situation. 20-25 % of children do not learn the alphabetic principle (relationship between letters and