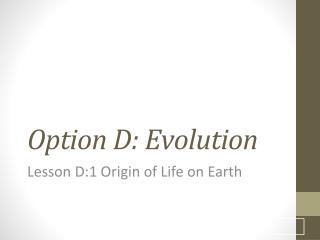 Option D: Evolution. Lesson D:1 Origin of Life on Earth. D.1.1 Describe four processes needed for the spontaneous origin of life on Earth. The non-living synthesis of simple organic molecules The assembly of these molecules into polymers Evolution - . evolution. evolution = a change in gene frequencies in populations over time evolution explains origin of

Right, Warrant and Option - Learning goals. understand what is right offering and its characteristicshow to value

Evolution for Beginners - . what is evolution?. a basic definition of evolution…. “…evolution can be precisely

Evolution - . definition: process of change through time. theory of evolution. provides an explanation for the

Evolution - . what is evolution?. evolution is a theory which states that all life forms change over many generations .

Evolution - . evolution . cladogram – a chart that shows an organism’s evolutionary history . change in a population

What is Evolution? - . the kind we’re talking about is sometimes called organic evolution to distinguish it from

Welcome To The Evolution - . welcome to the evolution. an introduction to a spiritual meaning of the mayan calendar

17-3 Evolution of Multicellular Life - . how multicellular life evolved from its earliest forms to its present day

5.4 Evolution - . we will be studying this topic at the higher level (option d). 5.4.1 define evolution. syllabus