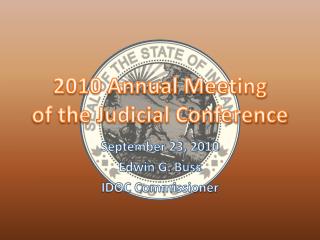 2010 Annual Meeting of the Judicial Conference. September 23, 2010 Edwin G. Buss IDOC Commissioner. What We Do. Contain potential dangerous convicted felons, preventing them from reoffending within their communities By Barry DeCicco, September 23, 2010 - A review of ‘a step-by-step approach to using sas for factor analysis and

September 23 - . 1. during the french and indian war, why did most of the native american tribes side with the french?