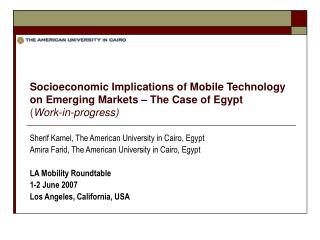 The Evolution of Technology and its Implications for Investment Policy - Nrel june 24, 2009 w. brian arthur external

Financial Institutions and Markets - . the markets. outline of contents. a recap of semester one money markets capital

Population Change in Texas: Implications for Human and Socioeconomic Resources in the 21st Century - . by steve h.

Ancient Egypt - . where is egypt?. egypt is in the continent of africa. the river nile runs through egypt. the capital of