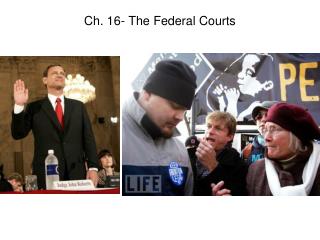 Ch. 16- The Federal Courts. Warm-up. Should SC Justices rule mainly on the original intent of the Constitution or their personal backgrounds and experiences?. VS. Composition 9 Justices Appointment Appointed by the President Confirmed by the Senate Term of Office Lifetime Appointment.

THE FEDERAL COURTS - . least dangerous branch or imperial judiciary?. the 2000 presidential election. fought in a series

The Federal Court System - . what is the role of district courts? how are courts of appeal and the supreme court similar?

Courts and ADR - . every business person can expect to face at least one lawsuit in their career where? federal court

Supreme Court - Http://www.fjc.gov/federal/courts.nsf. supreme court. 1 us court of appeals for the federal circuit. 12

The Judicial Branch - . the judicial system: inception. the judiciary under the articles of confederation constitutional

Judicial Branch - . american government. jurisdiction of courts. the united states has a dual court system of state and

Ch. 5 &amp; 6 Clicker Review - . review. the two court systems in the united states are the original courts and

Ch. 16 Federal courts - . (hoffman’s favorite!). intro to courts. standing to sue: gives you a reason to take someone