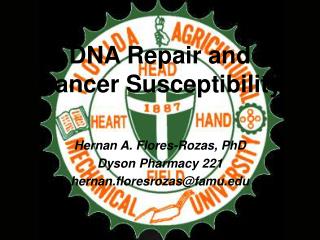 DNA Repair and Cancer Susceptibility. Hernan A. Flores-Rozas, PhD Dyson Pharmacy 221 hernan.floresrozas@famu.edu. What we will address in this lecture: Introduction to cancer and control of cell proliferation. Oncogenes, tumor suppressors and clonal origin of cancer. ANTI ~ CANCER DRUGS - . zenaida n. maglaya, md, fpsecp. cancer. is a disease in which there in uncontrolled

Chew On this - . a nurse’s guide to teaching the oncologist averse what to eat and why. bianca moses fall 2012. cancer

Group Five - Cancer in Adults - . starting w/ andrew. cancer! . what is it about cancer! fear we no longer have control!

Chapter 54 Cancer Chemotherapy - . background. it is the second most common cause of death in the developed nations one

Breast Cancer - . what is breast cancer?. breast cancer is where cancerous (malignant) cells are found in the breast