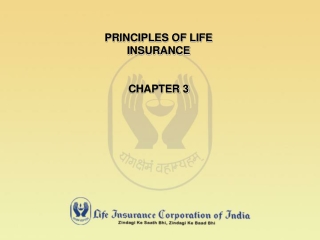 PRINCIPLES OF LIFE INSURANCE CHAPTER 3. LIFE INSURANCE CONTRACTS. What is a contract? ♠ A contract is an agreement between two or more parties to do, or not to do something, so as to create a legally binding relationship. Principles Of Insurance - . meaning of risk . risk is the potential that a chosen action or activity (including the

Insurance Principles - For every insurance company, there are different principles so for the sake of everyone, axis

3 SUCCESS PRINCIPLES For LIFE - . do you have a huge why?. 2. are you pro-active in your results producing activities?

Chapter 3 INSURANCE BASICS - . all of the following are torts except: a. absolute liablity b. negligence c. legal