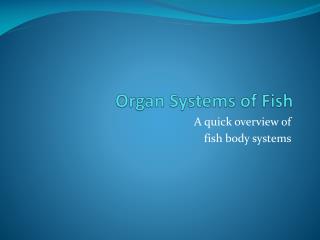 Organ Systems of Fish. A quick overview of fish body systems. What is a System?. A system is a group of organs that work together and provide an organism with an advantage for survival. It is the most complex organizational level in an organism ORGAN SYSTEMS - . august 23, 2013. body covering. integumentary system: include the skin and accessory organs such as the

Organ Systems Foldable - . title your project “ organ systems ” title all 11 body systems on the flaps of your

Animal Organ Systems - . anatomy and physiology. fundamentals of life. all living things are made up of cells. cells are

Animal Organ Systems - . study of the form , shape , and appearance of the animal. anatomy. focuses on the function of

Anatomy and Function of Organ System in Fish - . cells. all living things are composed of one or more cells. cells become