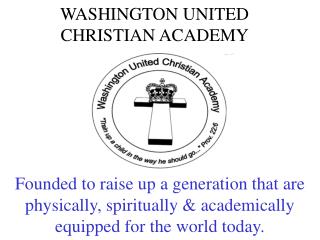 WASHINGTON UNITED CHRISTIAN ACADEMY. Founded to raise up a generation that are physically, spiritually & academically equipped for the world today. ‘School of the Year for 2005’. WUCA received an award for being the school of the year for 2005 from Maryland Center for Character Education. Wildwood Christian Academy - . providing excellence in education. “train a child in the way he should go, and when he

The Academy for Christian Thought Thinking Things Through in a Theological Safe Space - . project timothy session 2 of 30

The United States - . (there are 316 million inhabitatants). the emblem is an eagle. the president is barack obama.

The Young People of Christian Academy - . and their mission trip blessing to grace church. the voice of god. god and

George Washington: The First President - . starting the nation. on april 14, 1789 at mt. vernon, george washington was

Welcome to the Teaching-Learning Academy - . tla. exploring multiple views of teaching and learning at western washington

Washington Monument - . by navjot, harleen, martha, torijean, roy. history. the washington monument is a memorial to

The Current Financial Crisis; Implications for Insurance Regulation in the United States - . presentation to the

Immanuel Christian Academy Our History - . the lutheran church, beginning with martin luther, has over 400 years of