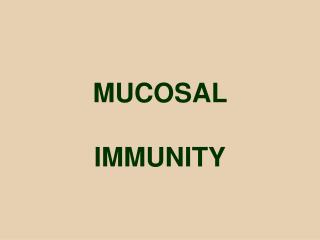 MUCOSAL IMMUNITY. MUCOSAL IMMUNITY - CHARACTERISTICS. skin and mucosa are interfaces between immune system and environment estimated area of mucosal surfaces is several hundreds of m 2 musosa is the largest organ of the immune system complex protection is mediated by both Immunity - . trisha economidis, ms, arnp spring, 2014. war declared…. we are at war with our environment troops are

Immunity - . 6.6 vaccination. learning outcomes. students should understand the following: the use of vaccines to

Immunity - . what is immunity?. immunity is the body's ability to fight off harmful micro-organisms –pathogens- that